When building habits, it helps to know what kind of game you're playing.

Habit building for success (in business or to earn money, for example) usually takes a completely different path to habits for skill growth and improvement.

Confusing one with the other may lead to unrealistic expectations and cause you to lose focus right at the point where it's needed the most.

To illustrate this point, I'll start with a story from my own life...

Around 10 years ago I upped and left the UK to move to Romania with only around $10k in savings.  I moved into a flat with someone I'd never met before as we embarked on an adventure to build a software company together.

It was a risky decision.  We barely had any savings and planned to bootsrap the whole company from scratch...The stakes were high and the margins were thin.  I had 6 months to make things work before I'd run out of savings and have to move back home to look for another job.

Those first few years were pretty damn tough.  Probably the toughest years of my life.  I'd usually spend 8 hours during the day coding the software, while spending most evenings (and often working right through the night) supporting our existing customers.   Even New Year's Eve took a hit in that first year; that landed me in hot water with my girlfriend at the time!

To be honest, it was a pretty brutal period.  I was working twice as long as all my friends and making probably 20% of what they earned in their day jobs. We had enough to pay the bills, but not much more.

In the second year, things got a bit better.  I was still working long hours to grow the company and make it a success, but at this point I was earning enough to do things without always being worried about money.  I was still working harder than my friends, while earning less, but the gap started to close.

Fast forward to today, 8 years or so later, the trend has reversed. Not just slightly, but by orders of magnitude.  The company we started together eventually started to grow and became relatively successful.  Today, at 37, I'm completely financially free and work because I enjoy it, not because I need to.  I could stop working completely and the company would run without me with no effect on my income.  I find myself in an extremely fortunate position that most people aren't able to attain in their 30's.

This story highlights a distribution curve that's important to understand if you're building habits to start a business or create something that requires recognition and reach in order to prosper (growing a YouTube channel for example).

It's called the law of disproportionate results.

If the habit you're building falls into this category, let's call them entrepreneurial habits for lack of a better name, then it pays to recognize that your results are likely going to follow a curve that is flat for a long time at the beginning (often years), but then increases at a rapid rate as you reach the tipping point.

Recognizing this early on means you can set the right expectations:-

But not all habits are the same.  What about the other type of habit?

This type of habit is the completely opposite to the law of disproportionate results.

I'll take another example from my own life to illustrate:-

A number of years ago I recognized that I had trouble communicating ideas effectively and so decided to embark on a project to study 140 of the top self develompent books and create videos about them.  This was essentially a skill building habit.  The only goal was to improve my skill rather than to build a following, business or achieve any kind of external reward.

Well, my first video was a mumbling disaster, as you might expect.  But even the second video was noticeably better than my first one.  After about 20 practice videos, the difference in video quality was substantial.

And here's the video that I was able to create after 20 attempts:-

Not the best video you'll ever watch, but a huge difference from my first one.

However, after about a year, I reached a bit of a plateau.  I was able to create pretty good videos on complex topics and found it harder and harder to know what I needed to do to improve and take it to the next level.

Here's an example of what some of my later videos looked like:-

At this point, doing another 20 videos might increase my skill level slightly, but the difference will be nowhere near as vast as it was for my first 20 videos.

It's a point that we all get to when practicing a skill.  It's the point where the number of hours of practice you put in to reap a 1% improvement gets larger and larger the more proficient you get at that skill.  It gets harder and harder to improve.

Elite weightlifters competing for the Olympics will spend 4 years of hard and gruelling training day in and out to squeeze an extra 1 or 2kg onto their lifts. That's an insane amount of effort for seemingly such little reward.  Yet that extra 1 or 2kg might be the difference between bringing home the gold medal and leaving empty handed.

That's not to say that if you reach the point of diminishing returns that the skill is not worth continuing.  That's subjective and very much dependent on what you want to achieve in your life.

But it is something that's worth recognizing so you can set your expectations.

So, if you recognize that you're building a skill habit, you should have the following expectations:-

The law of disproportionate results and the law of diminishing returns produce very different result curves.

When building a skill your progress is initially rapid but slows down over time. When building a business, or something similar, expect results to come slowly to begin with but accelerate when you reach the tipping point.

The chart below shows how these two distributions compare to eachother:- 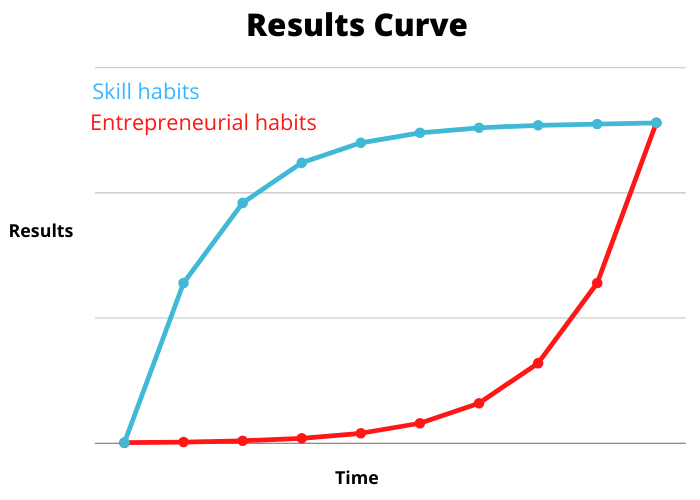 When deciding to build a new habit into your habit system, ask what kind of habit you're building.

Is this an entrepreurial habit or a skill habit?

Don't expect to build a business in a few weeks and don't expect to continue improving your skill at the same rate as you did at the beginning.

If you start an entrepreneurial business building habit with the expectations of a skill building habit (and vice versa), you'll be sorely disappointed, and will likely end up quitting.

Know the game that you're playing.